skip to main | skip to sidebar

The hiking season is rapidly coming to a close but I wanted to get another peak in. Alth 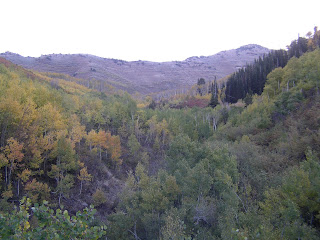 ough not an "elevener," I had wanted to climb Shingle Mill Peak for some time because of it’s proximity to Cascade Mountain and Freedom Peak, and also because of it’s appearance from the freeway. I love the pyramid look to it, and the erosion terraces beneath it set it a part from many other peaks.
I took my trusty 2-wheel drive Pathfinder on the trip because it has a higher clearance than our other cars and Squaw Peak Road can be rather rocky past Rock Canyon Campground. I arrived at the trail head (on the left side of the road shortly past Rock Canyon Campground and marked with a post with trail #60 on it - the Dry Fork trail) at about 8:20 in the morning and got started soon thereafter. 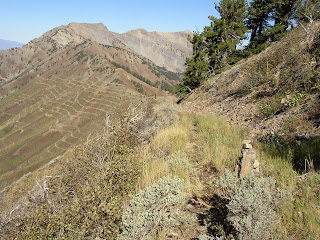 The morning was chilly and I stopped a couple of times just to warm my hands in my pockets because they were getting cold on my trekking poles. The first two miles have most of the elevation gain in them, gaining about 1000 feet in each mile.
The ridge line is visible early on in the hike and looks a lot closer than it really is. But this was a good thing for me because it kept my hopes high that I would be there soon and back soaking in a hot bath in no time.
The trail was very well maintained and led through some pretty aspen trees, pine trees, and meadows. The one frustrating part of the trail was the constant switching back below the summit. Many times it looked SO much shorter to just climb straight up the ridge to get to the saddle rather than switch back and forth so much. 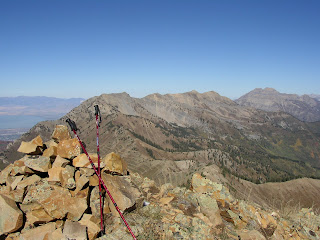 In fact, much of the switching back is just level walking, as you only gain about 400 feet in the 3rd mile. But I had read a report about a failed attempt trying to do what I had thought looked easier - hiking straight up the side to get to the saddle, so I decided to stick with the trail.
Just before arriving at the saddle, I looked back and noticed four tents that I had basically walked right by and not even seen because they were in a perfect camping spot just above the trail and surrounded by a few small pine trees.
Once at the saddle, there is a sign labeled with Big Springs Trail #59 pointing north, Dry Fork trail #60 pointing south (the way I had just come) and Shingle Mill Peak trail #57 pointing East, the way I was headed.
Once on Shingle Mill Peak, the trail is less defined but marked well with cairns by a Boy Scout for his Eagle Project. I followed the cairns with relative ease getting lost once in a while but finding the cairns not much later. In reality, it would be pretty easy to route find your way to the Peak on your own. 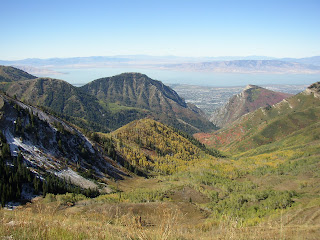 The trail ends up on Shingle Mill’s south ridge as it takes you to the summit. I arrived at the summit at 10:50, after about 2 ½ hours of hiking. Since I forgot to pack a lunch or even a snack for that matter, I decided to take pictures, try to call my wife (unsuccessfully - no cell coverage), and head back down. The views of Freedom Peak were great. I had no idea how rugged of a peak that is. Climbing it next year will be a challenge.
I headed back down, surprisingly having not seen any wild life at all on the whole hike other than the occasional bird that flew out of a bush that I had come upon which got my adrenaline pumping.
The whole hike took 4 hours and 12 minutes and was about 9.1 miles. It was a pretty fall hike and a good "easy" hike after a short time off from hiking, my last hike being Superior and Monte Cristo a month to the day earlier.
Posted by Three Plus Me at 6:11 PM 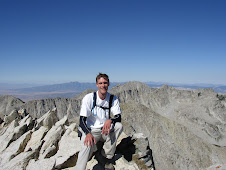